SCIENTISTS: Hydrogen water protects against the harmful effects of radiation. Why do doctors recommend taking water enriched with hydrogen gas? 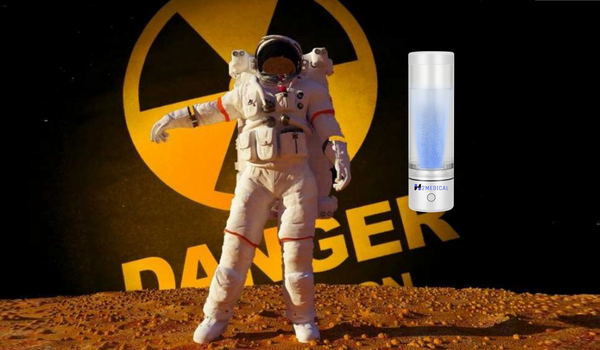 A little-known fact is that the hydrogen gas molecule (H2) is the smallest in size (only 2 microns), allowing it to penetrate anywhere in the human body, even into the cell nucleus and mitochondria of the cell itself. In this article we will focus on the application and use of hydrogen water (water enriched with hydrogen gas) to reduce the harmful effects of radiation on human health. The texts used in this article are parts of 3 scientific reports translated from English. The links in the article will take you to the full content of the medical studies. Let's make an introduction to the topic, taking into account the opinion of the Nobel Prize nominee Dr. Garth Nicholson and his colleagues on the safety and health benefits of hydrogen. Dr Nicholson is President and Chairman of the Institute for Molecular Medicine in California, USA.

Hydrogen water protects against oxidative stress. Any disease leads to an increased level of toxic free radicals in the body. Exposure to radiation also leads to the formation of an excessively large amount of free radicals (oxidative stress storm) that damage tissues and lead cells to apoptosis. Oxidative stress in whatever form and whatever caused is very harmful to the body. H2 readily neutralizes free radicals, in particular the most dangerous to health hydroxyl radical (*OH-) and the oxide radical ion (0+). Especially important is the fact that H2 selectively targets only hydroxyl radicals. Other free radicals (e.g. nitric oxide radical) are actually important for cell physiology and homeostasis. Unlike other non-selective antioxidants, H2 leaves these beneficial free radicals unchanged, making it the most potent and effective antioxidant. Hydrogen gas-rich water is useful in treating damage caused by oxidative stress and inflammation, as well as treating soft tissue damage. Studies have shown that H2 helps to maintain homeostasis of enzymes including glutathione, superoxide dismutase, catalase and others. H2 also demonstrates an ability for cell signaling, which is very beneficial for brain and neurological function. Hydrogen is absolutely safe - it has no toxicity or side effects, making it an ideal therapeutic agent in the treatment of many diseases.

Definitely the title of this scientific article sparked our interest. Hydrogen is involved in many complex chemical compounds in the creation of new high-tech materials, and its molecular form (in the form of /H2/ gas) finds widespread application in both energy and medicine. See the translation of the summary and conclusion of this study entitled: "Hydrogen therapy can reduce the risks associated with radiation-induced oxidative stress in spaceflight" (https://www.ncbi.nlm.nih.gov/pmc/articles/PMC7596391/)

Space radiation is known to induce DNA and lipid damage due to increased oxidative stress and remains a major problem in space missions. Hydrogen, recently discovered, as a new therapeutic medical gas in various biomedical fields has potent antioxidant and anti-inflammatory effects. Space mission activities are expected to increase in the coming years, both in number and duration. It is therefore important to assess and prevent the risks astronauts face due to oxidative stress from radiation, and before clinical symptoms of disease develop. Administering hydrogen to astronauts by inhalation or drinking hydrogen-rich water could potentially lead to a new preventive/therapeutic strategy to prevent adverse radiation-induced events.

More research is needed on the application of hydrogen therapy in space travel. The main issues relate to the dissolution of hydrogen in water in space and the ability to dissolve and maintain desired concentrations of dissolved gas in water prior to consumption. However, we believe that hydrogen represents a novel therapeutic and preventive strategy for the treatment of radiation-induced oxidative damage during space missions.

The H2MEDICAL Team: Among hundreds of scientific reports, this 2020 study also impresses with its conclusion, "Hydrogen water reduces radiotoxicity induced by tritium exposure in vitro and in vivo" (https://academic.oup.com/jrr/article/62/1/34/5998879)

Researchers have always tried to look for an ideal radioprotector. The sulfhydryl compound amifostine, called WR-2721, which is the only radioprotector registered for use in humans, has shown good radioprotective activity. But it has many side effects limiting its clinical use, such as hypertension, nausea, vomiting, etc. Some natural antioxidants, such as vitamins, flavonoids, etc. have less toxic effects, but also have a lower degree of radioprotection. Therefore, the ideal radioprotector should be effective and with few side effects. So far, no radioprotector could meet these criteria. Hydrogen gas (H2) as a new class of radioprotectant gives us more hope and possibilities. Research to be done in the future is ongoing.

In the last 3 years, H2MEDICAL's hydrogen water medical devices have entered the homes of thousands of people in Bulgaria. Thank you for your trust! Having felt the power of hydrogen, we strongly support the scientists' thesis and believe that H2 will be involved in the treatment of more and more diseases in the future. We recommend you to use only certified and quality devices for water enrichment with hydrogen gas. Devices of questionable quality make oxides and do not completely isolate ozone (O3) from water, while magnesium tablets for making hydrogen water generate magnesium oxide (MgO) in addition to hydrogen gas. O3 and MgO are carcinogenic and cause harmful side effects on the body.

Learn which hydrogen-tolerant diseases are in the menu HYDROGEN MEDICINE /

22 Reasons: WHY do people around the world choose KYK brand HYDROGEN WATER appliances?

What is the difference between ALCAL and HYDROGEN WATER, and what are the appliances for them?

Application of hydrogen and hydrogen water in the treatment of macular degeneration, retinopathy, glaucoma, cataract, etc.

Hydrogen water - water enriched with hydrogen gas. Medical report on the treatment of cancer and other serious diseases with hydrogen.

Why HYDROGEN WATER is good for both children and their mothers during pregnancy?

How does HYDROGEN WATER act on the immune system, inflammation and autoimmune diseases?

Administration of HYDROGEN WATER in patients with COVID-19. What does the President of the Molecular Hydrogen Institute say?

Clinical studies have shown a therapeutic effect of HYDROGEN WATER in the prevention and treatment of the ten major causes of death.

Hydrogen water is a powerful remedy for ACID REFLUX, GASTRITE and excessive oxidation of the body.

Intake of HYDROGEN WATER for cardiovascular diseases. Effect and safety.

Why HYDROGEN WATER is chosen by Japanese athletes for the Olympic Games in Tokyo in 2021?

Benefits of HYDROGEN RICH WATER for the intake of medicines and dietary supplements. What do we need to know?

HYDROGEN WATER for brain health. Therapeutic effect of H2 in Alzheimer's disease, Parkinson's disease and many others.

Effect of molecular hydrogen in SPORT and fitness. HYDROGENIC WATER - a revolution in medicine and sports.

Is HYDROGEN RICH WATER a medicine? Medical report on the SAFETY and action of H2 in radical severe diseases.

What is HYDROGEN WATER and what makes the apparatuses for it different in price and quality?